An expert aquarist would definitely know about the significance of filtration. A good filter media is quintessential in a sustainable aquarium setup. It’ll absorb various harmful chemicals and help maintain the nitrogen cycle. All of this is important to have good water quality in your aquarium.

There are lots of good filter media in the market nowadays but the one I’ll be talking about today is exceptional. The star of today’s show is the Seachem Purigen, an organic resin filtration media. Let’s get to the seachem purigen review!

Seachem Purigen is a premium quality synthetic adsorbent that delivers groundbreaking results when it comes to removing harmful compounds from your aquarium.

It removes impurities from water at 500% the rate of all competing products, not by removing them one at a time, but through its macroporous quality to remove nitrates and ammonia in addition to insoluble matter such as dirt and debris. 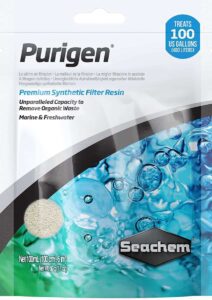 Purigen will last 2-3 times longer than any ion exchanger or adsorbent on the market because it can’t be clogged or saturated with particles, like Vespene Gas for Starcraft fans out there when Builders’ Barracks need more time building!

Below, I’ll be covering different aspects of this unique filter media including key features,  benefits, a few things to keep in mind before buying it or while using it, and more.

Seachem Purigen has a lot of perks, way ahead of any contemporary competition. If you’re curious to find out what does Purigen offer, you can have a look below: 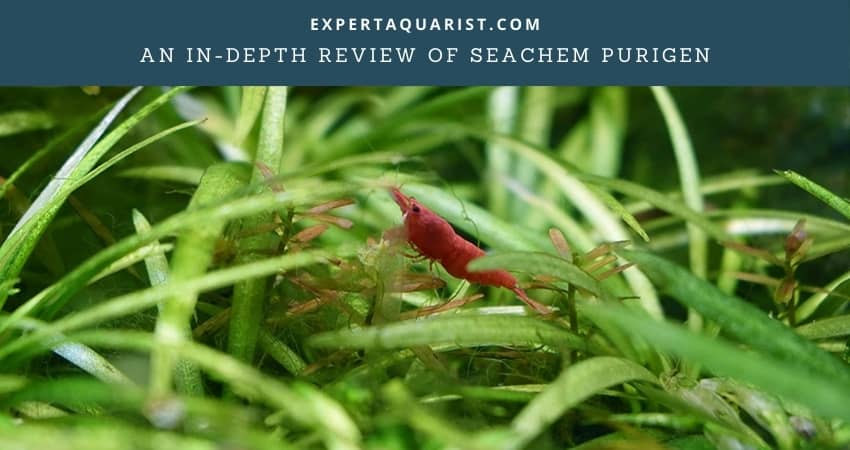 The reason seachem purigen is so popular is because it provides the user with excellent features and perks for an exceptionally reasonable price. I’ll talk about in detail below:

Purigen certainly helps in making your aquarium water clearer. If the water gets discolored due to tannin or other such substances, use of Seachem Purigen can help you in clearing that up. It removes microscopic particles from the water to make it look much more clearer.

You can use the purigen in both freshwater and saltwater tanks. As you already might know, in the case of a freshwater tank, if you put driftwood in your tank, it often leaks the humic substance it contains into your tank water and they tend to discolor your water. Yes, purigen can solve this problem for you by clearing up your water and keeping it that way. You’ll see satisfying results in 24 hours!

And in the case of saltwater tanks, it is similarly effective. It removes the toxins released by the corals and anemones among other substances. This keeps your water clear and creates a healthy environment for its inhabitants.

Purigen helps in controlling the amount of ammonia, nitrates, or nitrites in your water tank by removing nitrogenous organic wastes such as fish wastes, remaining fish foods, decaying plants, etc. These wastes could turn into toxic compounds if they are left unchecked. But purigen takes care of them efficiently.

But what’s best about purigen is that these nitrogenous compounds are removed even before they can form ammonia, nitrates, and such other elements. Isn’t that amazing?

3. Works in a greater capacity

Most resins in the market are spherical-shaped. This is where purigen is majorly different. It’s both spherical and macroreticular.

The macro-porous and sphere-shaped structure of purigen allow it to have more tiny pores. Having so many pores makes it more functional in removing wastes and gives it a higher capacity than other filtration media.

Beneficial trace elements are important if you’ve got a planted aquarium or have corals in your tank. These trace elements include Iodine, Phosphorus, Molybdenum, Nickel, Copper, Manganese, Iron, Chromium, Selenium, Zinc, etc.

Compared to some other products purigen does not remove the beneficial trace elements and micronutrients rather it has very little effect on them.

This actually helps you because dosage management is important in such tanks.

5. Can work side by side with other medications

You might need to use some sort of medication if you’re having fish in your aquarium. But there are many filter media that negate or subside the medication effects to a certain extent. Purigen is not one of those.

If you need to medicate your tank, you do not have to remove purigen as it does not impact the efficiency of the medication.

6. Does not leach chemicals

Seachem purigen doesn’t hog simple elements like other ion-based resins. While most ion exchange resins are focused on metals, purigen is solely a nitrogenous scavenging monster. It ignores leeching elements that it doesn’t need to and solely focuses on devouring nitrogenous compounds that could be more problematic for the tank.

Purigen will keep absorbing waste. After prolonged use, it will start losing its effectiveness and turn darker in color. But that doesn’t mean you have to throw it away. You can actually regenerate it! And the method to regenerate Seachem purigen isn’t hard at all. I’ll include the method below.

Apparently, you can regenerate it on an average of 10 times. If you revive it every 4 months, it means you can keep your aquarium clean for more than 2 years. That’s a heck of a deal. I have also included the regeneration process at the later part of the article.

How To Use Seachem Purigen

Before putting it in the tank, you have to give it a rinse. Then place it in a fine filter mesh bag and leave it to work on its own. You can put purigen in a canister filter, internal power filter or, inside a HOB filter! You should see some progress in 24 hours. With 1L purigen, you can treat 1000 gallons of water. 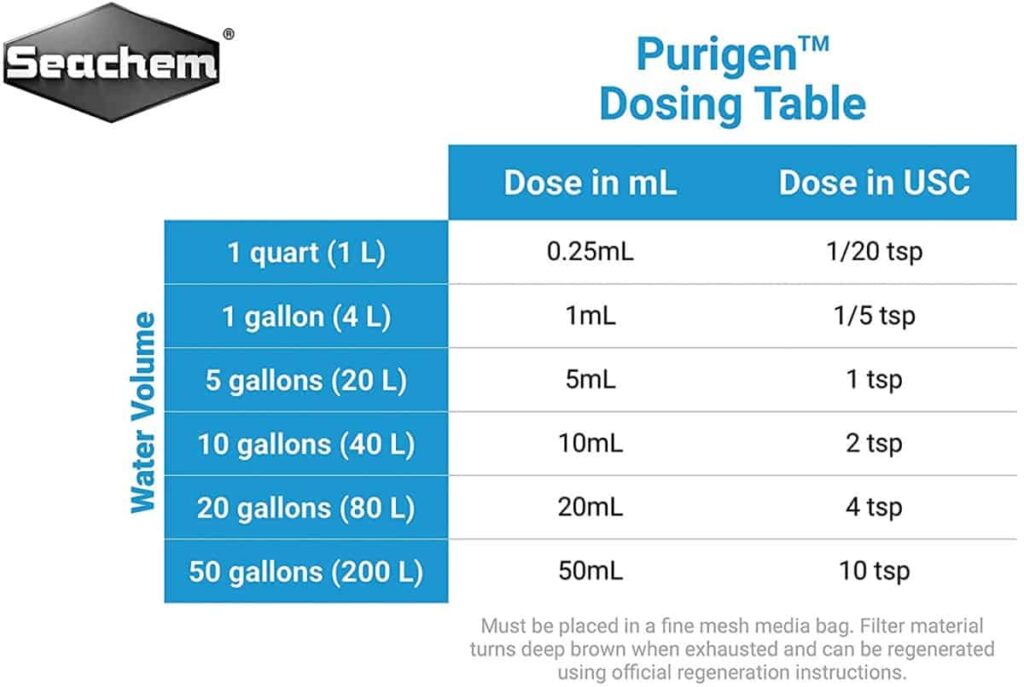 Now, all you gotta do is watch whether or not the color of the media changes or not. Over time, purigen will turn brown, or even black.

How to regenerate seachem purigen?

I’m sure you’ve been curious after hearing that purigen is renewable. Well, I am not gonna leave you unsatisfied. Here’s the process of regenerating seachem purigen:

A few things to keep in mind

How long does seachem Purigen take to work?

If you add Seachem purigen in the recommended amount of water, it should start working after a few hours of placing. However, it won’t take more than 24 hours to show its magic.  .

Is Purigen better than Activated carbon?

How many times can Purigen be recharged or regenerated?

Thankfully, you can regenerate the Seachem purigen 10 times which also makes it a very cost-effective option.

As purigen won’t produce or release any acid or buffering agent, It is not going to change the pH of the tank. It doesn’t disturb the kH and GH properties too.

Relax! It won’t remove fertilizer from your tank. It clears the water column by absorbing the organic waste.

Can I use carbon and Purigen together?

Yes, of course. You can use both purigen and carbon at the same time. Also, using them combinedly won’t have any negative impact on your fish and plants too.

Seachem purigen is a synthetic filter media that helps in removing wastes that are naturally produced in an aquarium in various ways. It gives your aquarium water a much clearer look compared to other filters .

Its macro-porous design makes it function more effectively and faster. It is also reasonable in price and moreover you can regenerate it multiple times for reuse which only increases its value for money.

So it’s the one that can be easily recommended, you can certainly give it a try.

Fish keeping in aquarium could be very rewarding. The vibrant colorful pets swimming around your living room soothes nerve and uplifts your mood. But maintaining and keeping up with it is a whole different story. One of the most crucial and strenuous part about keeping an aquarium is the whole cleaning aspect of it. And… 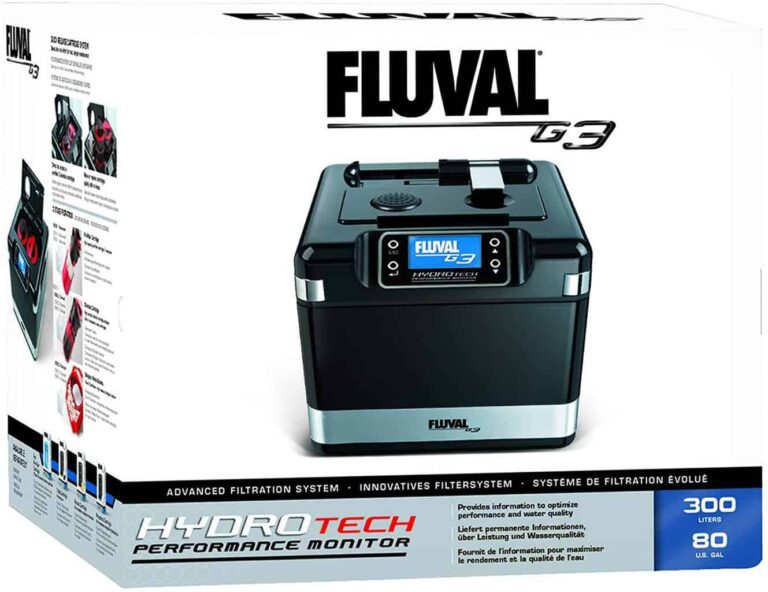 Maintaining an existing aquarium or purchasing a new one is both rewarding and challenging. While the oceanic beauty in your living room is an incredible reward, cleaning and maintenance are tough, to say the least. So, the first move is to be very vigilant about water purification and the further growth of microorganisms that cause… 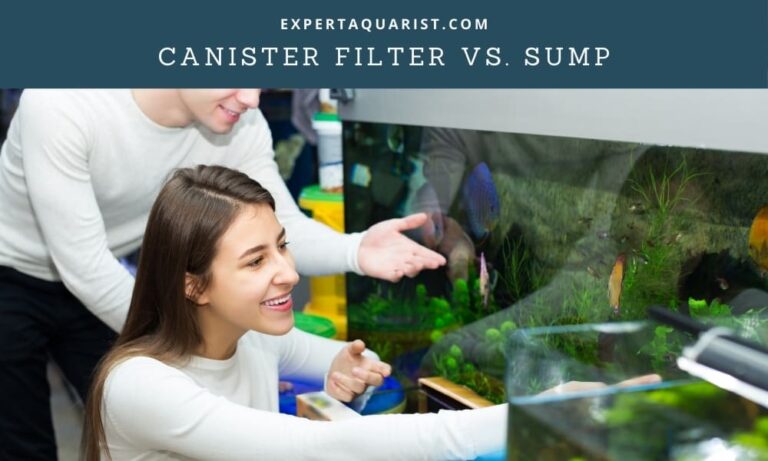 When you begin your aquarium career, you might be weighing the value and usefulness of different types of filters. Inevitably you would face the question, “Canister filter vs. sump, which is a better option?” Frankly speaking, even experienced aquarium owners will also face difficulties in choosing between the sump and canister filter. Even I was… 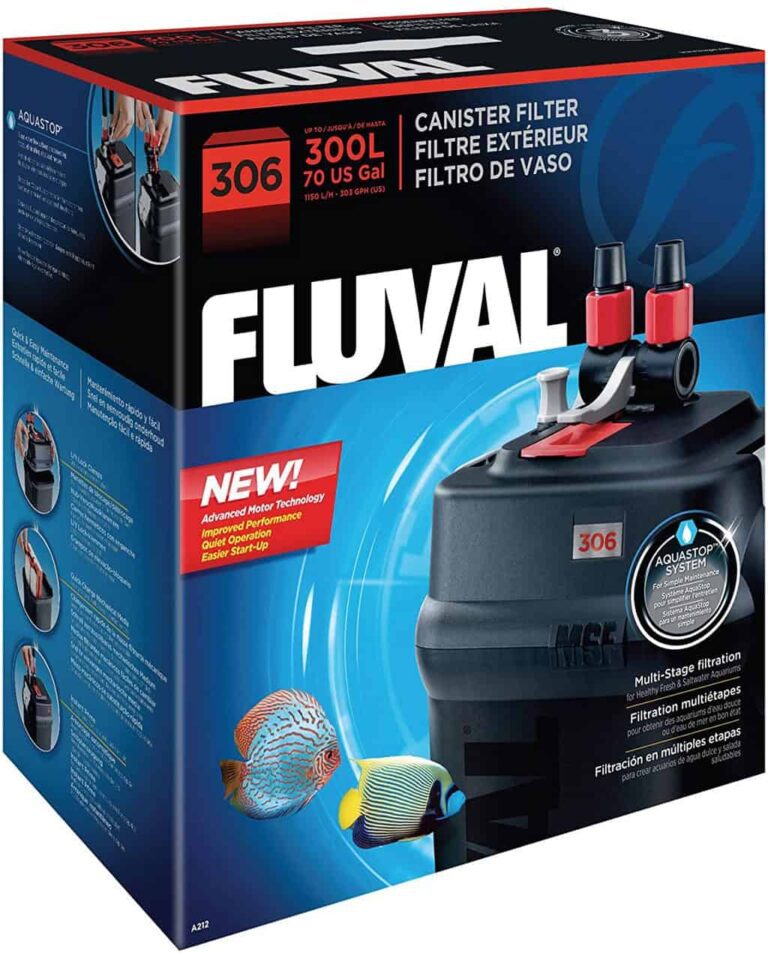 Being an aquarium enthusiast can be challenging due to the learning curve. Most people remain in confusion on what to get first, or how to maintain a tank. For proper maintenance, the first thing on your agenda should be to get yourself a filter. It is common knowledge that the tank inhabitants will begin to…

Before we dive into the details of our Penn Plax Cascade 1000 canister filter review, let’s face it, canister filters are typically associated with steep price tags. However, they are the most efficient fish tank filters, and their high price is often well justified. But today, we have selected a not so expensive aquarium canister…

Day in day out, aquariums tend to get fragments of waste matter that contaminate the water, hindering the lifestyle of your marine species. As an aquarist, it is essential to use any means necessary for better performance of your aquarium. So, are you having a hard time maintaining a clean and safe freshwater or saltwater…