Pet turtle carrying the infections like salmonella is just not a novel phenomenon. And it is not just about the turtle only. For certain reptiles, Salmonella is indeed very familiar and does not exhibit any health symptoms. It is part of the general GI microbes.

So, you must know how to get rid of Salmonella in turtles. And in today’s article, we will discuss the same. Our discussion will extend to knowing salmonella symptoms in humans and how to stay away from the infectious bacteria.

So, don’t miss the chance to safeguard your turtle, family, and livestock from the tragic attack of Salmonella.

What does Salmonella mean?

Salmonella is known for causing stomach disease and comes from the genus of bacteria. An American doctor named Dr. Daniel Salmon discovered Salmonella in 1885, and the bacteria was named after him.

It is a type of Zoonotic bacteria that can transmit from animals to humans through scratch, bleeding, touch, etc.  The bad news is that most reptiles are a host for the bacteria. You will find Salmonella in the outer skin and shell of the turtle.

When you pet the turtle, the bacteria can transmit from the turtle shell in your hand. From your hand, Salmonella can quickly transfer in your entire family members and livestock. While it is not so serious (only 1% salmonella attack may be fatal and needs hospitalization) for humans, livestock is super-vulnerable against it.

So, you should know the ways to remove or at least reduce Salmonella in pet turtles.

Where Does the Salmonella Come From?

Salmonella is found widely in polluted water or fish. However, it comes into the human body from the host in several ways. The most common sources of salmonella infection for humans are chicken, eggs, and meats.

Some less common sources are pet turtles, reptiles, cattle, pigs, etc. And the list doesn’t end here. You may get salmonella infection even from amphibians such as salamander, frogs, and newts.

How Can Salmonella Harm Humans and Livestock? 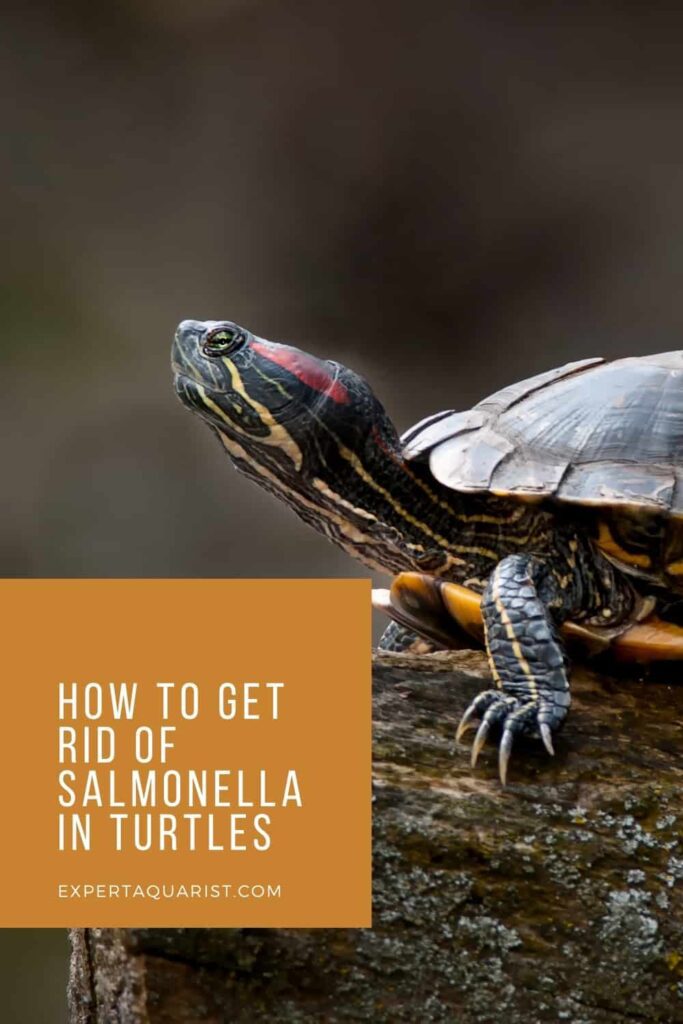 Salmonella can potentially cause infections in humans and left them bedridden for a few days. Humans infected with salmonella bacteria may face stomach pain, ache, or diarrhea, which may last from a few hours to a few days.

However, the good news is that the chances of human death from salmonella infection is rare. One case of the human casualty was recorded in Florida in 2007 when a 4-week-old kid died of Salmonella infection. Doctors reported that the Salmonella DNA was transmitted from the tortoise to the baby DNA.

So, here’s what you should know about turtles with Salmonella-

Even if a little turtle doesn’t even seem infected, Salmonella is undoubtedly on its outer skin, which will end up making young children infected. And children might infect themselves unintentionally, sadly.  Children prefer to stick to the little tortoises and play with the pet turtle.

After that, they will unknowingly insert their finger inside the mouth, which contained Salmonella by touching the turtle. The bacteria often infect this way, kids.

Besides, Reptile aquariums and accessories are often cleaned in the kitchen sink, which could also contaminate feeding utensils and food, thereby placing children and older people at considerable risk.

However, the bacteria can contaminate surface areas such as countertops, dining tables, bare ground, and carpeted surfaces if the tortoise is permitted to roam on the soil. On these surfaces, bacteria will live long. Cleanliness and hygiene and management are highly necessary to avoid bacteria transmission and ensure that you and your families are safe.

How to Get Rid of Salmonella in Turtles: 7 Best Steps

Turtles like to make a mess of their containers and the swimming pools, especially aquatic turtles. Since Salmonella lives mostly in the intestines, all feces should indeed be treated appropriately and routinely cleaned.

Daily cleaning of the box is necessary to minimize the chance of Salmonella contracting. You can continuously maintain and opt for frequent water adjustments for marine turtles. Don’t always sweat on some pants to launch siphons!

When you feed the turtle or clean the turtle tank, your hands will contact the outer turtle skin. This increases the risk of running into Salmonella’s contact. Make sure to wash your hands and purify your appliances after touching your tank water.

The idea of salmonella-free turtles, which contribute to Salmonella-free hatching, was implemented in recent years. Salmonella bacteria are eradicated from turtle eggs. Studies have shown that even a salmonella treated turtle may catch the bacteria from different sources in various stages of its life.

You should note that turtles and Salmonella both don’t know about the salmonella treatment! So, the first salmonella-negative test just means that they don’t shed bacteria right now. But it would help if you continued the treatment in the future. Sadly, veterinary salmonella treatment with antibiotics is inadequate and will not be treated because of clinical symptoms and culture and susceptibility checks.

Don’t spend your money on the strains that some antibiotics are “bacteria-free.” Only owners have a false sense of confidence when it comes to purchasing Salmonella-free turtles.

And if you get a positive salmonella turtle, as you would probably do, the risk is small if you handle the turtle properly and follow good grooming.

Contact the Association of Reptile and Amphibian Veterinarians for more info and facts about Salmonella and reptiles. They provide tools for pet and medical staff surrounding reptile Salmonella diseases.

How Did I Get Salmonella from My Turtle?

By the time, you might be sure that humans can catch Salmonella directly from the pet turtle. In the following points, we have discussed the possible sources and ways of getting seen by Salmonella from the turtles.

Salmonella Symptoms in a human:

When a human is infected with Salmonella, in most cases, he may not show any symptoms unless he is in a severe state. The most common signs of a salmonella infection may include:

Many salmonella-positive people will develop these signs from 6 hours to 6 days after exposure to bacteria. The severity may vary from mild to high, depending on the salmonella strength. Also, kids are most vulnerable to the salmonella attack than adults.

The symptomatic condition typically lasts four to seven days. The good news is that most of the patients will survive untreated.

And even if some patients are hospitalized, records say that they have already developed some other diseases that boosted the sickness. The infection of Salmonella can sometimes be transmitted from the gut to blood & then on to different parts of the body. The likelihood of such happenings is more remarkable in children under 5, adults 65 and older, and individuals with poor immune function.

How to prevent infections of Salmonella in Human

The danger of Salmonella contracts is factual and must be treated carefully. You will significantly reduce the risk of infection with careful treatment and hygiene maintenance inside the turtle tank and home.

You have a minimal chance of salmonella infection if you live a healthy lifestyle and maintain cleanliness.

Besides, the risk for really young, elderly, and people with pre-existent disorders is higher than most infectious diseases. (The Centers for Control and Prevention of Disease advises that reptiles not be housed at least in homes of people at risk). So, you should take extra care of the babies and older to help them remain free from the severity of Salmonella.

The most useful practices to prevent salmonella infection in human includes the following suggestions.

One important thing is to note that when it originally came to holding turtles and other reptiles is cleaning your hands. Wash your hands thoroughly before and right after your pet reptile is treated. Don’t kiss or lick your turtle and track the care of pets by children. It’s also better to restrict their contact if your children can not open his mouth away from your pet.

The ban on the sale of hatching turtles in the United States was instituted back in 1975, primarily due to Salmonella infections in pets’ (small enough) infants. When you purchase a turtle, make sure you go by the rule.

Kids often lick baby turtles and may take them into the mouth, contaminating the kids with Salmonella. So, we suggest you avoid prucashing turtles small enough to be held in kids’ hands and licked by kids.

Some practical steps to get rid of the salmonella infection from turtles to your body include the following steps.

Livestock is particularly vulnerable to the salmonella attack. Once cattle are infected with Salmonella, the entire farm may get barren with cattle. Also, it risks Salmonella transmission to humans.

Hence, if you treat the pet turtle, never forget to properly wash your hands and body parts before going close to the cattle. Also, train the workers to wear gloves while feeding, bathing, and treating the cattle to prevent salmonella infection.

How Can You Get Infected Easily and Unknowingly?

The glassy animals may look beautiful and trivial, but tiny tortoises may cause human beings to get sick. Turtles are frequently found on the outer skin and shell of salmonella bacteria.

Salmonella may not be visible in the naked eyes, yet, the bacteria is powerful enough to take a toll on your health. Hence, when you purchase a turtle, you must follow the suggestions we mentioned above on how to get rid of Salmonella in turtles.

It will keep the turtle in a happy state and safeguard your family from unwanted sickness. Hence, be aware of the facts and take precautionary measures if you don’t like to get bedridden for a few hours to a few days with a salmonella attack. 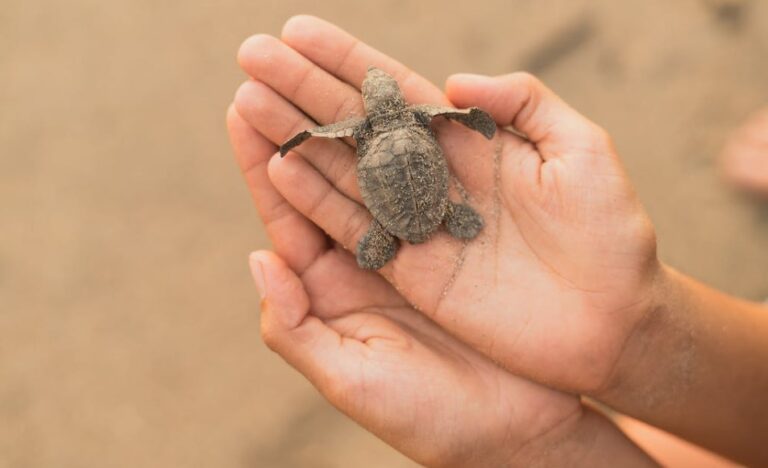 All turtle species and tortoises are distinguishable because of their shell covering. The shell is there to protect the turtle and serve as a home. Now, you may wonder if shells are developed as baby turtles grow. Or are turtles born with shells already? The answer is that they are born with a shell in… 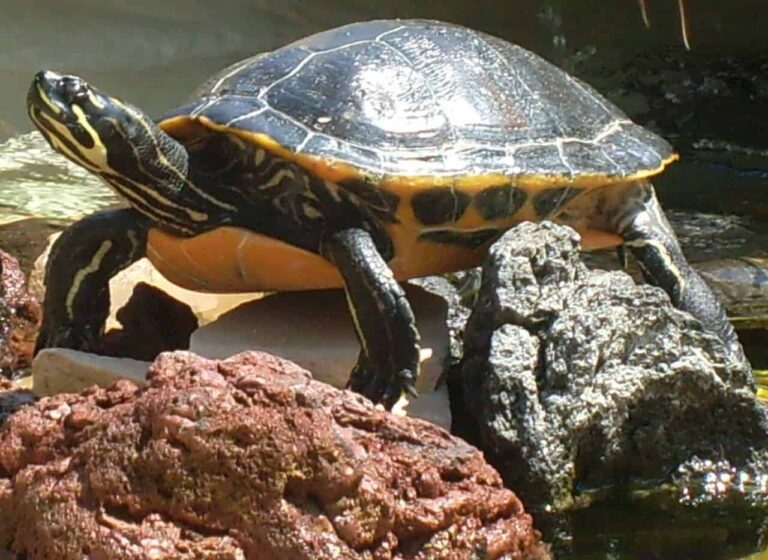 If you own a turtle, you need to take proper care of it, which starts with the turtle tank maintenance. Hence, it is essential and mandatory to know how to clean the turtle tank. While many turtle owners may ignore the importance of cleaning the tank, it is necessary for turtle health. That importance being… 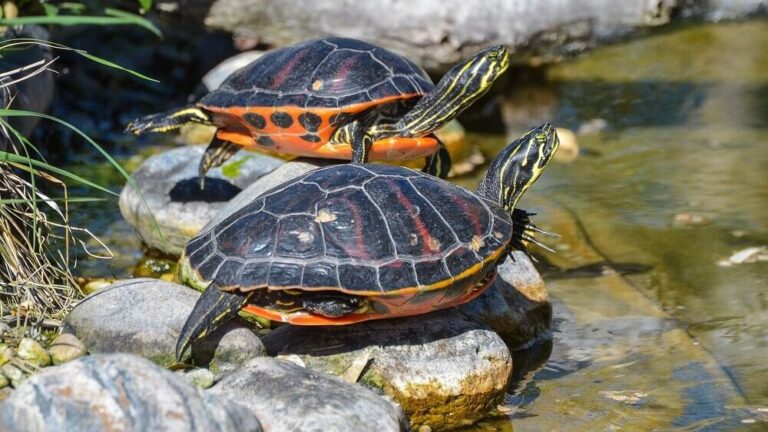 Turtles are great pets and can generally be content living in aquariums. However, if you can provide your turtles with an outdoor pond, you should consider doing so. This is because an outdoor pond is a much more spacious environment for your turtles to live in. It also mimics the turtles’ natural habitat, which will… 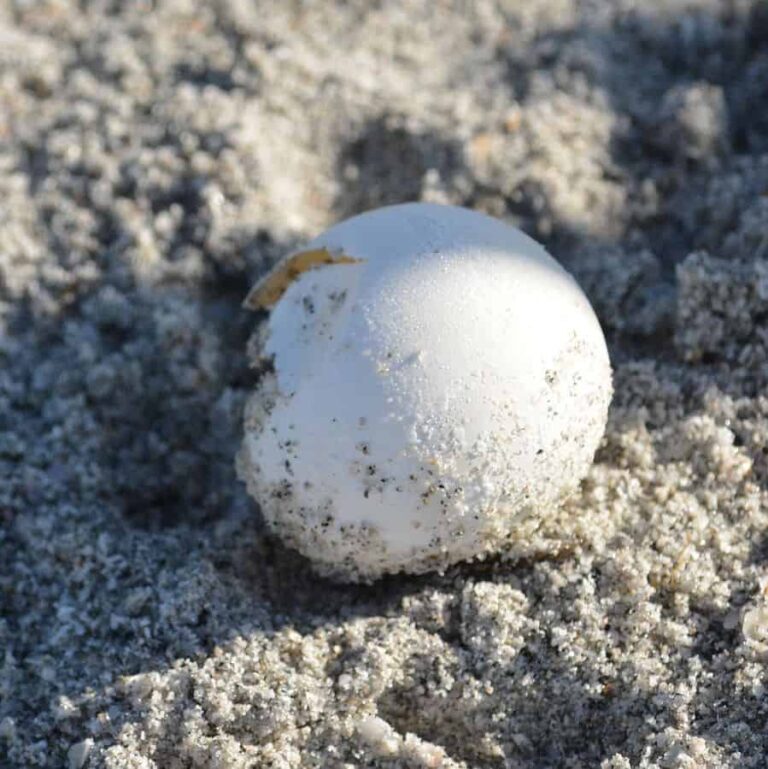 When I first started keeping turtle at home, I was excited. And my excitement touched heaven when I found one of my female pet turtles had laid some eggs. To be honest, I didn’t even have a hint that she is going to lay an egg. Anyway, I went on further and tried to take… 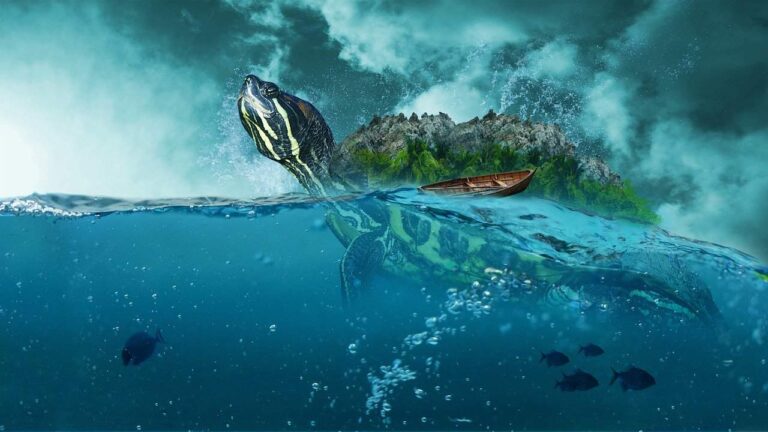 Turtles are so fascinating yet so complex and unexplored creatures that we have many myths circulating about these tiny cute reptiles. And if you are a turtle owner, then these myths are even more concerning for your pet’s safety. One such myth is that you can’t drown a turtle since it’s an amphibious animal too….