Koi fish is most commonly referred to as Nishikigoi and come initially from the wild koi carp fish. Thanks to its bright color and impressive pattern markings, koi fish has become the most popular display fish.

Hence, different types of koi fish have been purposefully bred around the world for aquariums, ponds and competitions. To be honest, you will find over hundred koi fish varieties for commercial aquariums around the world.

However, not all of these varieties are popular. Hence, we have picked the most popular and loved koi fish types in our description.

Why Should You Know the Koi Fish Types In Detail?

Well, this question can easily come into most aquarists’ mind. Many beginners would just consider that they are at liberty to purchase any koi fish types as they want. So, what is the importance of knowing the differences and similarities of koi fish? 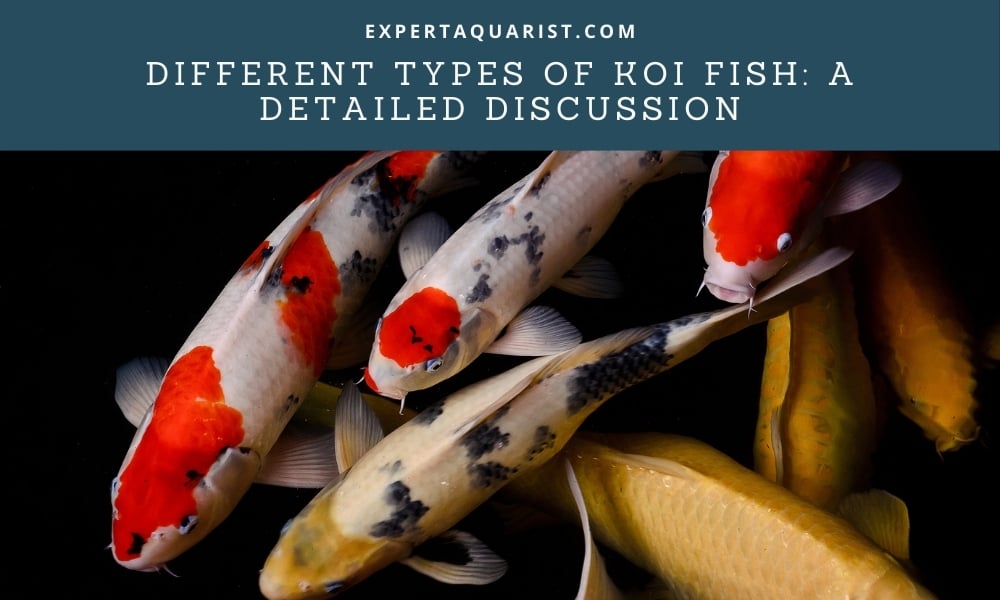 First off, the koi fish subspecies’ differences are so subtle that beginners often can’t distinguish them. Hence, they might often end up getting the wrong koi fish type. Therefore, knowing the variations in colors, marking patterns, and breeding will help them quickly identify their desired type and get it.

Also, breeders need to know about the subtle distinctions between the koi types to interbred them to develop into the more popular and profitable breeds.

Difference Between Goldfish and Koi Fish

Koi fish and goldfish are so identical that even experts at times fail to distinguish between the two species. Hence, before going deep into the discussion of koi fish varieties, let’s see the detailed differences between these two popular aquarium fish.

Now it is time to know the different varieties of koi fish. You will find many popular types in the market, and it is virtually impossible to list all of them in a single article. Hence, we have picked the top ten selections for you. 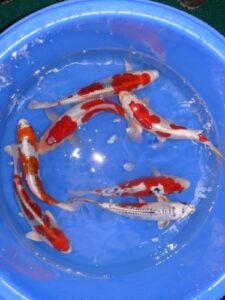 People call Kohaku the ‘King of Koi,’ and we don’t argue with the comment. Truly speaking, it comes with true color variety and looks majestic. In fact, it is the 1st koi breed that developed with two different colors.

Its exquisite color combination makes it an automatic favorite and competition winner for all.

Kohaku primarily has a streamlined white body with red blotches. The white color on Kohaku is known as Shiroji in japan. The red scars are thick and make it distinctive from the universal koi fish appearance.

The red blotches are referred to as ‘hi.’ It can be of two kinds: the red color with purple tint and the reddish-orange combination.

The red and purple tine Kohaku are easy to maintain and suitable for beginners. However, its thick red color will slowly disappear as the fish grows older. So, it is less popular among koi breeders. On the contrary, the red and orange combo doesn’t fade away with age. Also, you can clearly see a margin between the red and white colors on these fishes. So, it becomes even more popular.

Nonetheless, it is quite tough to maintain the Kohaku with a red and orange color combo. Thus, only experienced breeders can try their luck with them.

The unique marking pattern of Kohaku makes it stand among other koi fishes. You will see the vibrant red mark at its head. These red markings are separated from the standard red color on the different parts of the Kohaku body.

If the red body markings extend to the head, these Kohaku are referred to as Bongiri. And if the head lacks any unique red pattern, it is known as boze.

Showa koi is sometimes referred to as Showa Sanke due to its long tail. You will also hear people calling it Showa Sanshoku. The word Sanshoku means three colors, which genuinely signify the Showa koi fish. Indeed, Showa has three attractive colors on its body. These colors are black, white, and red.

The black color is mostly the body background of Showa, and the red and white markings are promptly visible over the black background.

Showa koi fish comes with distinctive black color, and it runs throughout the entire body of Showa. It is different from the Sanke since Sanke features black patterns only on its upper body. Also, Showa lacks black colored patterns in its head, unlike the Sanke.

Along with the black patterns, the red and white colored patterns are equally distributed through the entire body of Showa koi. The margin between the three colors is vivid, crisp, and easily visible.

Utsuri comes with a Sumi pattern on its head, similar to that of Showa. Note that sumi patterns actually refers to the black marks on the koi fish. Also, the sumi pattern runs across the entire body of Utsuri koi fish. It is also identical to the Showa sumi patterns. The design is large and reflective, with a predominant appearance.

It also has a sumi pattern right at its tail, and it runs through the entire body of Utsuri koi to reach its nose and head. It gives the fish a uniform look.

Taisho Sanke is most commonly known as sanke only. Sometimes, people refer to it as Taisho Sanshoku as well.

Sanshoku in Japanese refers to three colors. Indeed sanke feature three colors on its body that includes red, black and white. Likewise, the Kohaku, Sanke, comes in red and white colors. The difference between the two popular koi varieties comes through the red color presence in sanke.

Also, Sanke is categorized among the big three koi fishes you will find in the aquarium world.

The sanke head comprises the red and white color mostly. It doesn’t come with any sumi or black markings. Also, unlike Kohaku, the red color is visible in the head, and the face is void of any redness on it.

You will see sumi markings with the white background on the pectoral fins of sanke koi fish.

Tancho is a special type of koi fish since it has been named after Japan’s national bird, Tancho Crane. The fish is easily identifiable with a big red spot on its head. The red pigmentation adds a lovely attractiveness to the otherwise white body of Tancho.

There are different varieties of Tancho available in the market. The most eye-pleasing and picturesque of all these varieties is the TanchoKohaku. It comes with a snow-white body and has a unique crimson red marking right at the head.

Although the red marking is round but it can be of other shapes as well. You can find diamond-shaped, oval, or even heart shape markings. But it needs to be symmetrical on either side to be called Tancho.

Also, the red marking will be a single one and not multiple patterns.

Bekko in Japanese refers to a tortoise shell. People are often confused with the Bekko and Utsuri varieties of koi fishes. However, Bekko features a dominant white, yellow, or red body with distinctive sumi or black patterns.

Also, bekko is void of any black markings on its head. 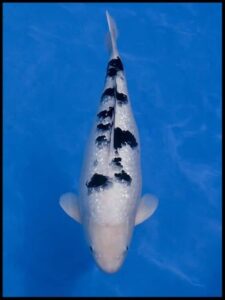 The physical appearance of the Bekko is differentiated from the dominant body color. There are three categories of bekko, depending on their body appearance. These types are:

Whatever the bekko body’s dominant color is, it will have regular black markings except for the fish’s head.

With a striking blue-color pattern on the top of the body, Asagi koi is beautiful and lovely. It is famous for the unique body-colored top. The tummy section also features a combination of red and orange colors that make it even more beautiful.

The red color will spread through the upper body as Asagi koi ages.

The standard blue-colored top of Asagi is more commonly known as TakiAsagi. It also features white-colored scaling. It runs right between the blue and red patterns of the asagi. Another type of asagi is Hi Asagi.

It has red lines instead of blue-color markings. The head is usually void of any markings with white color mostly.

It is a modified version of Asagi koi fish. However, unlike asagi, shusui is void of any scale on its body. So, shusui is basically scale-less. Hence, it also doesn’t have any blue-colored pattern. You will see some scales along the dorsal line of the fish body.

Also, these scales are presented in a single row.

The shusui comes with a pale-blue or white head without any possible markings. The red-color sometimes extends through the cheek of the shusui koi fish.

It is not a specific type of koi fish. Instead, it is an entire koi fish family and signifies the large-sized koi fishes. It actually comprises of the largest koi fishes you will see. Also, it is incredibly fast-growing. Some of the different types of koi fish that falls under the Kawarimono family are:

Its white body comes with net-like black and blue patterns from the Asagi koi. On the other side, Kohaku provides the all-important red color markings. The red color features hi-plate marks, which are dominant.

It got the name goshiki or five colors because it indeed comes with five colors on the entire koi fish body. These five color patterns are:

1. How many types of koi fishes are available?

Honestly speaking, you will see hundreds of koi fish types in aquariums and breeding farms. It includes the dominant types and subtypes of koi fishes. However, the basic classes for koi fish are 22 for easy identification. The rests are subtypes.

2. How can you distinguish between the different koi fish types?

You will have to examine the koi fish variety chart properly. It comes with distinctive and unique features of all the dominant types of koi fishes. You will have to have a clear idea of the color patterns and markings and the scale and fin-type to distinguish the various styles.

We have to admit that the koi fish category is broader than one might expect at first. Hence, classifying the different types of koi fish in a single article isn’t possible. We have only mentioned the most popular and widely found koi fish breeds on the list.

Some other mentionable types include Hikari mayo, HikariMuji, kujaku, ogon, etc. The classification mainly comes from the color-pattern presence on the koi fish body.