When it comes to shrimp keeping (or breeding), both Crystal Red Shrimp (CRS) and Red Cherry Shrimp (RCS) enjoy unmatched popularity. Both shrimps have attractive color patterns and intriguing characteristics that make them so famous.

As a shrimp owner, the majority of aquarists want to have both the shrimp types in their freshwater aquarium to enhance the beauty, and some want the same for commercial purposes. But the question is, can you keep crystal red shrimp with cherry shrimp?

Well, you can keep red cherry shrimp and crystal red shrimp together. But there are certain preconditions including water parameter, tank setup, feeding, crossbreeding etc.

In this article we will discuss the topic in depth and find out the ideal set up for keeping RCS and CRS together in the same aquarium.

Crystal red shrimp is one of the most popular shrimp breeds that you will ever found. It falls under the category of Bee shrimp and is a type of dwarf shrimp as well. Likewise, cherry shrimp, the CRS were also developed (by selective breeding) in the late ’90s and later braced by shrimp enthusiasts worldwide.

The discovery of CRS has an intriguing and somewhat unexpected story. It was discovered almost accidentally (fortunately, it happened).

Hisayasu Suzuki first saw the crystal red shrimp among his Black Bee Shrimp in 1996. He found a bright red colored among his bee shrimp population and started developing it. Later, some shrimp enthusiasts also joined him, and finally, the intense red and white striped came into being.

As they improved the colors and bred the shrimp, it emerged into a new shrimp type with a slight gene variation from the original one.

The CRS is extremely sensitive. Therefore, you need to know the proper tank water parameters for the CRS.

The understanding of the water conditions within the tank will also help you know whether or not you can keep the crystal red shrimp with cherry shrimp.

If the tank parameters for CRS meet with that of RCS, it is simple. You can then keep both shrimps together. And if the water parameters don’t match, you can’t keep them together.

You might be wondering whether the water condition is the only thing you need to consider before keeping both shrimps together?

The answer is yes.

But before we know why you need not consider other factors, let’s see the water parameters comparison for both CRS and RCS.

Check the requirements more carefully. First keep in mind that CRS is more sensitive than RCS. So, we need to keep the parameters as suitable for CRS as possible. At the same time if we can manage it to keep within the acceptable range of RCS as well then you are good to go with keeping them in the same aquarium.

So, here is my recommendation for a community shrimp tank with both CRS and RCS –

But there’s a question.

Will both the shrimp crossbreed?

Will CRS and RCS crossbreed?

For those early shrimp hobbyists, let’s define what crossbreeding actually refers to in real life. Well, to put it merely, crossbreeding means breeding two types of shrimps together.

So, how do we know will cherry shrimp and crystal red shrimp interbreed or crossbreed?

The answer lies in their genus.

A genus is the first part of the scientific name of any species. As the basics go, you can interbreed between two species of the same family.

But, obviously, you can’t interbreed between two different species from two various geniuses.

Thus, it leads us to understand the genus of crystal red shrimp and cherry shrimp.

If you take a close look at the two species, you will find that both come from the separate genus. Thus, you should get the answer by now.

You can’t interbreed or crossbreed between a Neocaridina (cherry shrimp) and Caridina genus (crystal red shrimp).

You can realize about the shrimp breeding procedure more from the shrimp crossbreeding list. It nearly covers the breeding possibility between all famous hobby shrimps found across the world.

Now that you know it thoroughly that you can pet both CRS and RCS jointly, it brings the all-important question in front of us.

How do we set up the crystal red shrimp tank?

So, here goes the answer.

Getting the right aquarium:

Both RCS and CRS are dwarf sized. Hence, a tank size of around 10 gallons of water capacity is ideal for rearing multiple crystal red shrimps or cherry shrimps. Experts say that smaller tanks are better since you can maintain the tank quickly then.

However, when it comes to rearing both shrimp breeds jointly, you need a slightly bigger tank ranging between 7-12 gallons since each breed will look for its hiding and breeding place. A larger aquarium is a staple of the shrimp colony.

While cherry shrimp thrives in an aquarium with algae that produce microorganisms, red crystal shrimp loves the aquatic mosses.

Hiding is an essential prerequisite of shrimps’ aquarium management. Both cherry shrimp and crystal cherry shrimp loves hiding space for many reasons. And when you rear both shrimps jointly, it becomes even more crucial.

Yes, if both shrimps are exposed in the open water, they will feel threatened that can wreak havoc in their health. As you know shrimp molts regularly and its a part of their growth process. While they molt they need to hide for obvious reasons.

So, you need to give them ample hiding space. You can use rocks, gravels, and aquarium plants to create such hiding spaces. Alternatively, you can use Cholla wood or driftwood to create a natural hiding space for the shrimp.

And if you like a mechanical procedure, we recommend you to go for the ceramic shrimp tubes. An anxious shrimp will hide behind these spaces from time to time and calm down.

No dwarf shrimp can live happily under powerful water current in a tank. They will be most likely to swept away by the strong current.

So, make sure the current strength is suitable for the CSR & RCS. It should create a gentle circulation in the tank but not sweep away the tank mates.

And lastly, you should get a quality filtration system for the crystal red shrimp.

(You can read our guideline on cherry shrimp filtration since it is similar for the crystal red shrimp as well).

If you introduce the CRS too quickly with the RCS, it can be a shock to the former one. So, you should go slowly.

The cherry shrimp shouldn’t bother much with the introduction of crystal red shrimps in their tank. You can arrange a shrimp treat for them to distract from the happenings for a while.

S, let me summarize, you can keep CRS with RCS if you can find a middle ground with the water parameters suitable for both CRS and RCS. Being different species they don’t crossbreed. So you can still do your selective breeding or keep both coloration pure without messing up.

Luckily, both shrimp breeds have an identical feeding practice that will be helpful for you. If you decide to keep them both please let us know in the comment and send us your tank picture. Happy shrimp keeping!

Cherry shrimps, or more particularly red cherry shrimps, have become one of the most popular aquarium shrimps since its 1st introduction in 2003. Its vivid color and richness in appearance have made it so popular that many people now take cherry shrimp breeding as a profession. So, if you are one of them, you need… 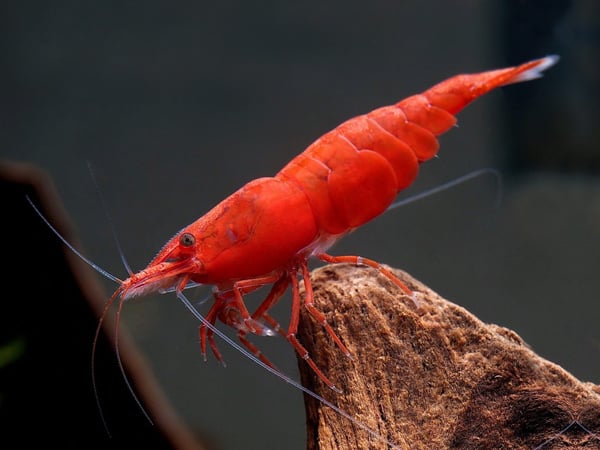 In recent days, cherry shrimp has become widespread and famous as an aquarium companion to most shrimp lovers. While most cherry shrimp owners pet the lovely looking and amicable dwarf shrimp for fun, some aim at making a profit with their breeding and sales. Whatever may be the case, we keep facing questions on, “How…

Crystal red shrimps (CRS) are the latest buzz in the world of the freshwater aquarium hobby. It is capturing everyone’s heart with its beautiful and lovely red and white color pattern. Moreover, this active member of the Bee shrimp family is comfortable to take care of in the tank environment. Naturally, beginners love starting their… 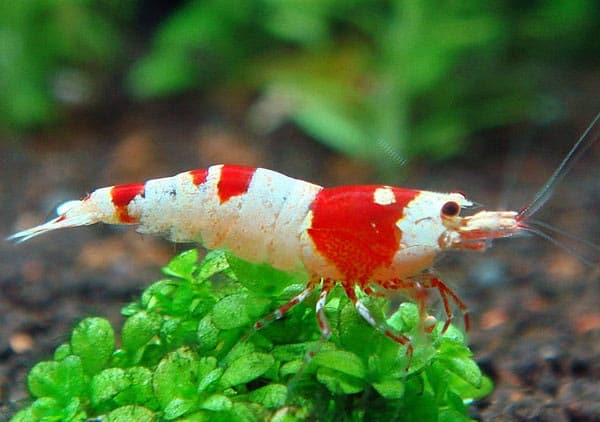 Crystal red shrimp is the new buzz in the aquarium world with its vibrant red and white color combination. Naturally, aquarium hobbyists are running after the CRS (crystal red shrimp) like crazy. However, with such craziness, amateur aquarists are having some problems. One such problem arises when the shrimp owner first see their pet shredding…

Shrimp hobby has grown vastly in the past few years. These beautiful tiny creatures have been successful to make space inside most of the aquarists’ heart along the whole wide world. Freshwater Aquarium Shrimps are the most alluring and interesting living beings to exist inside your tank. If you’re searching for a new addition to… 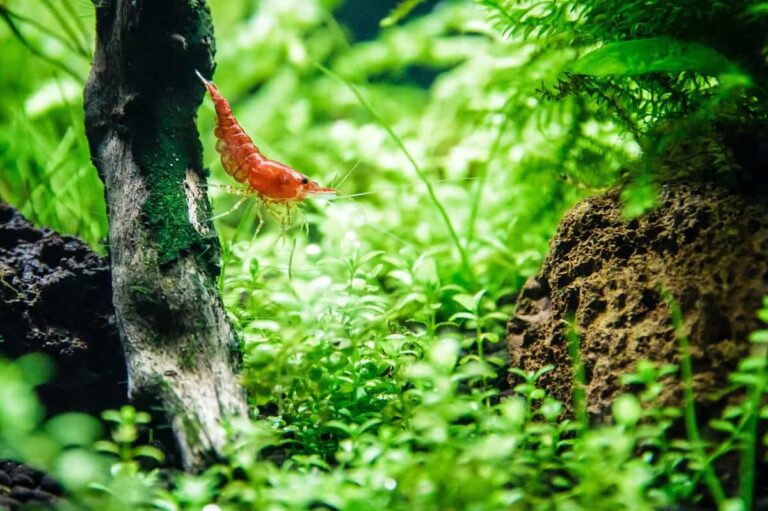 A cherry shrimp is so beautiful to look at that sometimes owner of the shrimps forget about adding other decorative items in the aquarium. One such often ignored yet essential aquarium product is the substrate. A proper tank substrate not only adds beauty in the cherry shrimp tank but also serves as a medium of…