Aquarium salt, chemically known as NaCl, is just a pure salt without additives or colors. Its popularity with those who pet freshwater fish, especially betta, is huge due to its deadly effects on parasites, aid in osmoregulation, availability, and cost-effectiveness. All of these benefits may make sense for you if you know how to use aquarium salt for betta correctly.

The salt can do more harm than good unless you are aware of the appropriate situations to use it, the right concentrations for different purposes, and other safety rules. This article includes all essential details and recommendations to help you ensure a safe living environment for your betta.

When to Use Aquarium Salt?

You can use aquarium salt for several purposes which boil down to two major scopes, such as the improvement of physical functions and tank water and uses as cures to illnesses. Here, we’ll discuss how aquarium salt can help your betta from time to time.

1. Growth of Pathogen and Parasites

If you’ve already missed a few cleaning schedules or overfed your betta, chances are that the aquarium has become a breeding place for parasites, pathogens, and worms, all of which can cause inconveniences to the fish including Ich, velvet, and other issues. Adding aquarium salt, you can go a long way as far as the control of these populations is concerned.

2. Improvement of the Slime Coat

Your betta fish, like most other species, has a slime coat composed of protein and carbohydrate that works as its frontline protection against almost everything from bacteria to objects. It also helps keep electrolytes and other essential fluids in your betta helping it overcome the surface resistance of water significantly and glide smoothly.

Factors like low oxygen and high toxin levels, temperature changes, and other issues may cause reduction to the slime coat over time. Aquarium salt, if applied in correct proportions, can accelerate the production of this slime coat. In addition, betta with bacterial infections, bitten/rot/torn fins, and open wounds can benefit from the salt.

3. Rise of the Nitrate Level

High nitrate levels are not healthy for your betta. Some of the causes of nitrate levels being too high include overfeeding, too many members in the tank, decaying/dead plant materials, dirty filters, etc. Aquarium salt helps prevent intake of harmful nitrates by the fish.

4. Improvement of the Gill Function and Respiration

Your betta absorb water through its gill and skin, and its kidneys carry out the excretion of water, which is a vital function. Aquarium salt in the tank water allow the kidneys to work less by reducing the amount of water that the gill absorbs.

Also, the salt replenishes electrolytes that the fish needs to ensure adequate oxygen intake and ammonia and carbon dioxide release through its gill. Thus, your betta can avoid getting stressed because its gill and kidneys won’t be working too hard.

The above purposes are considered as either general healthcare or preventive steps for bettas. Now that you can tell when aquarium salt can be considered, you need to know how much is safe for the betta and other populations in the tank. 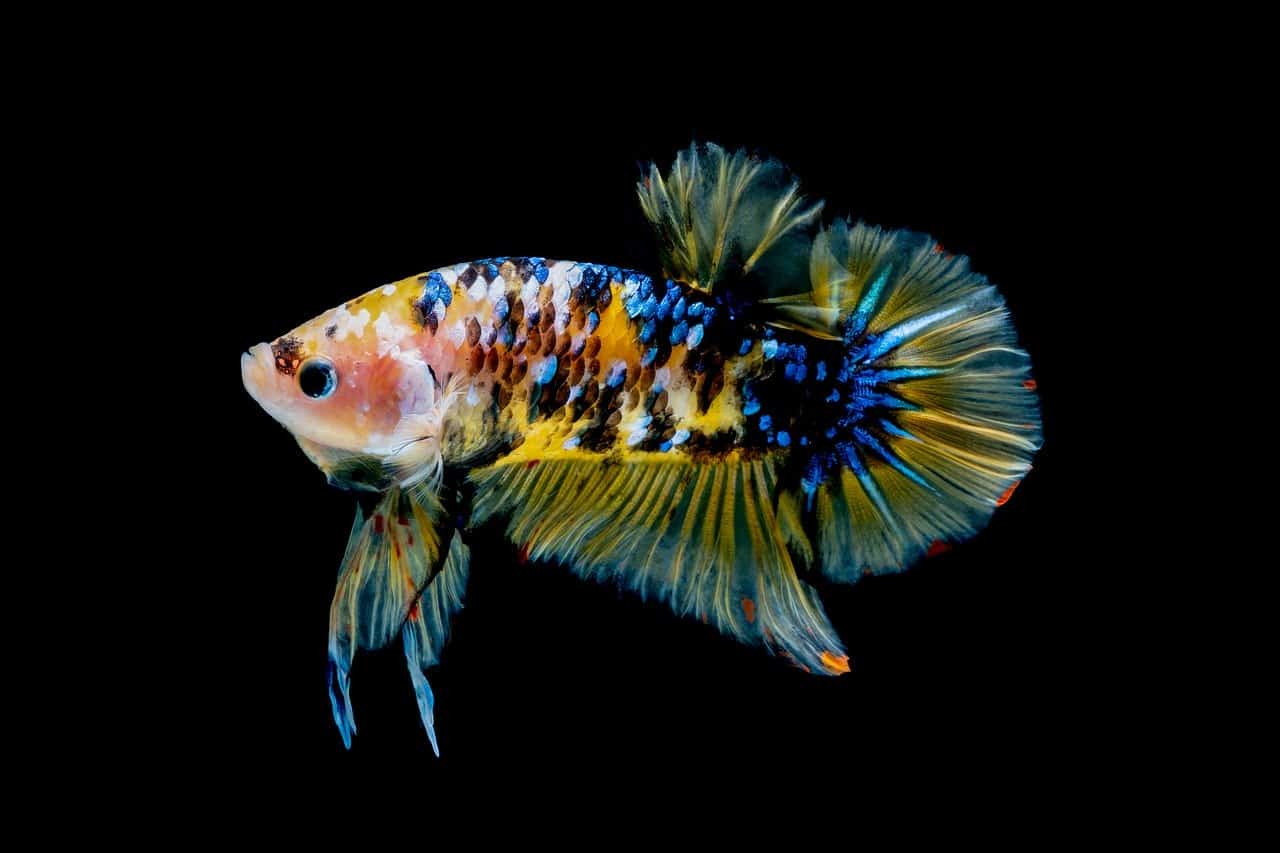 Unless you have an expert suggestion, you can use 1 tablespoon of salt in 5-7 gallons of water. This amount will not kill other species and essential organisms in the aquarium.

Should you use a higher concentration, it has to be for treating the aforementioned health issues, and you shouldn’t just increase the concentration without good reasons. Follow this steps to ensure safe applications of aquarium salt.

This should do whatever is intended. But don’t take this procedure as your steps to cure a betta that is sick or suffering from infections. We have brought you a separate section for this concern.

How to Use Aquarium Salt for Betta Illnesses?

Although you may have heard about controversies surrounding the uses of aquarium salt to treat sick bettas, there are certain cases where this salt can prove to be beneficial. Those conditions include minor fin rot and fungal infections, velvet, ich/ick (white spot), and open wounds.

Now, we’ll tell you how to use aquarium salt to treat these problems. However, these health issues can be so persistent that only aquarium salt may not be enough and you might end up depending more on other concentrated medications alongside the salt.

Symptoms of fungal infections in a betta include its body and head having white blotchy patches and frequent efforts to rub against different objects. Other visible symptoms include the loss of appetite and color, clamped fins, and lethargy.

Don’t continue this treatment for longer than 10 days. If the symptoms still exist, you should seek advanced options which involve specific fungal medications.

Common symptoms include frayed/ragged fin edges with black/white/red tone, fins getting thinner and falling to pieces with small holes and loss of color, and inflamed/slimy fin bases.

If this method fails, you must seek more effective method to save the betta from being prey to such a dangerous condition.

Most of the symptoms are identical to those of a betta with fungal infections. The only distinguishing symptom is something of a film with gold or yellowish hue that covers your betta. Shine light onto your fish to discover this.

Signs that your betta has ick are mostly similar to those of velvet except only you’ll see white specks on the head and the body instead of the gold/yellow film.

The treatment of this particular illness is practically same except some changes in the amount of salt and choice of medications to be used.

All we’ve told you so far is about dosing the tank with aquarium salt. But there are other methods which take only a fraction of the time but allow your betta to receive higher concentrations of salt for quicker results.

Don’t let yourself be inattentive to your betta’s minute-to-minute reactions because the level of salinity in the water will be variable, and it may cause serious problems to the fish. Don’t hesitate to put your betta back to the main aquarium if you see it move sideways or breathe very little or don’t breathe at all.

When Is Aquarium Salt NOT a Good Choice?

Aquarium salt in appropriate dosage doesn’t cause major problems if your Betta fish tank has only a betta population and there are no live plants. Don’t use the salt if your betta lives under any of these three circumstances.

Many betta keepers, due to their unjustified admiration for aquarium salt, use it to treat problems like swim bladder disorder, bloating, Popeye, dropsy, and severe fungal infection or fin rot. Using aquarium salt may cause further complications instead doing good to the fish.

Although it is associated with some success in treating bettas suffering from dropsy, the rate of mortality is far too high for the keepers to risk the method. You must consult experts before treating these diseases for they are often deadlier than the ones mentioned earlier.

Do your research to see if the specific plant you have in your aquarium can tolerate salt. If keeping live plants is your choice while seeing healthy bettas swimming happily, you should treat the sick ones in a separate tank.

Some betta lovers want to keep scaleless species. The problem with them is that they have no scales, and thereby nothing to work as a barrier. It makes them pretty sensitive to salt. The most vulnerable ones include some species of Corydoras, tetras, etc. Treating your betta in a hospital tank seems the only way.

However, you shouldn’t worry about dosing a tank full of betta and some clown loaches with salt because the latter can tolerate up to 1 tbsp. of salt in 5 gallons of water.

Since you are very close to the end of this guide, we understand you might expect a few more tips regarding the use of salt. Well, look at the following section.

Does Salt Have Anything to Do with the pH of Your Tank?

Answer: There are arguments that tonic salt can increase the carbonate hardness of water and also improve buffering. But its chemical properties have very little to cause any significant reaction and make changes to the pH of the tank.

Can You Use Other Salts Instead of Aquarium Salt?

Answer: Neither regular salt/table salt nor marine salt can be ideal for use in your betta tank because of their additives, flavorings, and color properties which can be lethal to bettas. Being much the same as aquarium salt in terms of chemical compositions, table salt is good only when it is non-iodized containing no additives.

Can You Keep Snails in a Salted Aquarium?

Answer: Some people prefer snails to other species as tank mates to their bettas. Besides being friendly to your bettas, snails are good at keeping the glass and plants clean. Also, they are pretty capable of tolerating low dosage of salt (1-2 tbsp. per 5-7 gallons).

Answer: Some types of bacteria including nitrifying bacteria can break down most of the organic wastes in your betta tank and offer a natural and biological way for filtration. These bacteria can be considered to be beneficial, and they are able to survive in salted water if the concentrations are not too high, like 1 tbsp. per gallon. However, you should keep eyes on their rapid infestation.

Regardless of what salt, even in the correct dosage, can do for your betta, you shouldn’t count on it as the only barrier between the fish and sickness. Salt helps, but it causes dehydration and eventually death when the exposure of your fish to it is too much or for too long.

Don’t forget to check the purity level of the salt you’re buying. Also, stay away from using it just when you see fit. Keeping up the quality of aquarium water, regular cleaning, weekly checkups, and other maintenance tasks help more than salt or any commercial medication.

Got more queries? Email us, and we’ll write you back!