Many of us think that their goldfish is pretty happy in a community tank or bowl with a few inches of length.

Well, this is not true. Don’t get shocked!

A goldfish can grow bigger than you have ever imagined in your wildest dream. In fact, the idea of goldfish growing small in size is as vague as the misconception of goldfish having a memory of three seconds only.

So, it brings us one essential and valid question.

How big can goldfish get?

Well, we have found that an average goldfish in a large tank may grow around eight to twelve inches. But the length varies considerably according to the goldfish type and age.

Hence, we will go deep into the discussion to find the actual size of a goldfish, and see off some of the largest ever goldfishes found. Finally, we will check if there’re ways to help your goldfish grow bigger and faster.

The results will shock you, definitely.

How Big Can Goldfish Get: An Average Size Estimation 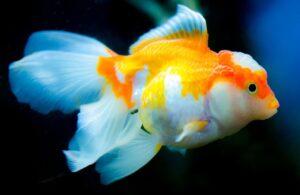 When we talk about goldfish size, we actually mean two things. These are:

Both of the factors are dependent on how long a goldfish can live and on the goldfish type. The age factor is pretty straightforward. The older a goldfish will be, the bigger it will be too.

The type variance thus plays the most crucial role in measuring the actual length and weight of a goldfish. Our research and experts opinion have found that a fancy goldfish can grow around seven to ten inches long. It will weigh approximately eight ounces to one pound.

The regular single-tail goldfishes grow slightly bigger. They will grow around eight to twelve inches, and regular goldies with one pound weight aren’t rare.

However, we were talking about the regular phenomenon now, But what about if something unusual happens? I mean to say, what are the biggest goldfishes ever recorded?

The Biggest Goldfishes of the History

According to a report published in BBC, the biggest goldfish is perhaps the Goldie who lived in Kent and is bowling scientists mind. The super-sized fish weighs around 1kg (2.4 pounds) and has a staggering length of 14 inches. Also, it had a height of 5 inches.

However, it was soon discovered that Goldie was the biggest goldfish in Britain but not the largest one in the world. A goldfish in Netherland was claimed to grow 48cm (19 inches) approximately. It was then recorded in the Guinness World Record. It was never weighted. So, we don’t know what the actual weight of the giant goldfish was.

Goldfish Length in the Tank and Pond

It is not that the goldfish can’t outgrow the bowl size. The length and weight restrictions mainly come from the low water condition in the bowl. To realize the actual growth possibility of a goldfish, we need to dig deeper into the goldfish development.

Goldfish is a domesticated carp bred. These were developed carefully from Crucian Carp and Prussian Carp. These carps came from Eastern and Central Asia. But now are widely found in Europe, America and even in Africa.

The carps generally grow around 18 inches to 20 inches. However, due to a long history of interbreeding and domestication, the size kept going smaller.

Now an average goldfish won’t grow more than a few inches in the tank.

Goldfish Length in the Wild

Well, let me remove a big misconception of you.

There are no goldfish in the WILD.

Even if someone has found a goldfish in the natural water bodies, the chances are high that they were purposefully released in the lakes and other types of water bodies. Also, at times, people mistakenly consider the Prussian golden carp as a goldfish.

However, as far records are concerned, the biggest goldfish found in the wild was nearly 3 pounds (1.4kg) weighty. Mike Martin found it in the famous Lake St. Clair Another impressive catch was located in 2002 in Dongguan, China with a whopping 15 inches height.  It was a pet in a local fish farm.

Researchers believed that the catch in St. Clair Lake was not an actual wild one. It somehow escaped the aquarium or was released in the lake.

Since goldfishes are messy fish, they can turn the aquarium into a dirty place soon. Hence, often the tank water gets cloudy and inappropriate for the goldfish. Also, despite your immense labor, the tank won’t contain proper nutrition is available in the wilderness. So, in the wild, they grow bigger than we may imagine.

Wondering how the escape from predators?

Well, their golden color turns into a dirty one, and they live in the bottom part of the water body. These two factors help them live safely and grow big, really big, in the wild.

We have already inspected how large a goldfish may grow in the wilderness and in the tank too. So, now you want to know how to grow goldfish bigger and faster in your tank?

Well, to know its answer, you need to know the factors that actually determine the goldfish growth in the tank.

Despite your earnest try and no matter –

Some goldfish won’t just grow as of to your expectation.

You ever asked why it happens?

Well, it depends on the genetics.  Some goldfishes are genetically dwarfed and won’t grow more than a few inches, naturally.

These smaller goldfishes are the perfect choice for smaller tanks.

The water quality remains a crucial factor for the growth of the goldfishes. They thrive in fresh and clean water more than dirty water.

Well, do you know why fresh water becomes so IMPORTANT?

The reason may seem unrealistic and striking to you.

Goldfish releases growth-inhibiting hormone. It restricts the growth of goldfish in the tank. Thus, water freshness plays a vital part in regulating fish growth. The hormone stunts the fish and slows its growth in the aquarium.

In a large pond or lake, the inhibiting hormone quickly dilutes, and thus, the goldfish can grow freely with its full potential for the bigger sizes.

A goldfish proliferates during the first few months and years of its birth.

So, if you miss the window during the first few months, the goldfish will never grow bigger, no matter how hard you try later.

The setback is that most pet stores will supply you a 1” to 1.5” long goldfish which is already at least, a season or two old.

So, you often miss this gate to help your goldfish grow really big.

Poor nutrition will restrict the growth of any fishes, and goldfishes aren’t any exception.  So, feeding the fish with proper diet is necessary for its proper growth.

What’s more alarming is that poor nutrition will allow a plethora of health complications that take place in a goldfish body. At the worst, it may die immaturely.

It is another understandable reason. Higher nitrate level reduces the goldfish growth, and lower nitrate helps it grow naturally.

Also, higher nitrate causes ammonia formation in the tank. It may cause the goldfish experience ammonia burning, which is a lethal disease for most aquarium fishes.

How to Grow Goldfish Bigger and Faster?

Many goldfish keepers often ask me this question.

Also, during my goldfish keeping career, I have identified the right formula to allow goldfish to grow bigger and faster.

The key to getting a really over-sized goldfish is to feed him regularly with a proper diet chart. Secondly, you should change the tank water periodically and supply fresh water to eliminate the growth restricting hormone.

Now, let’s see how you can regulate these factors to help your goldfish grow INCREDIBLY BIG.

Proper nutrition is crucial. Serious and expert breeders supply their fry goldfish with a high protein diet. It mainly consists of live foods, including brine shrimps and micro-worms.

First off, baby goldfishes love these foods and secondly, these stimulate the goldfish growth. Also, the feeding frequency plays an important part too. You should supply commercial pellets, veggies and other live foods too.

Balancing the protein and vegetable is vital too since too much protein can disturb the goldfish bladder, and it may die eventually.

Many goldfish owners intentionally or unintentionally restrict the growth rate of their fishes by keeping them in an undersized fish tank.

When you keep them in a large aquarium or pond, many goldfish have the potential to grow into a bigger size. Ample space in the aquarium lets your goldfish swim and exercise better. It doesn’t stunt the fish, and so, it grows much more prominent.

Ideally, fish keepers choose 50 gallons to 75 gallons of the aquarium for goldfishes. We recommend you to place them in a small pond to help them grow with full potential.

We have previously told you that dirty water is full of goldfish growth-inhibiting hormone. So, you should regularly clean the water and change it to find the remedy of the growth restricting hormone of the fish.

Also, the presence of the toxicity and nitrate in the tank forces the goldfish channel its vitality for survival instead of growing big. Hence, you should keep the water fresh and clean as much as possible.

It is recommended that you use a proper filtration system in the tank to regulate the water freshness and restrict the ammonia and nitrate growth. Filtration is necessary for ponds as well. It will boost the goldfish growth considerably.

It is another factor that needs no explanation at all.

Ideally, in warmer temperature, the metabolism of goldfish increases considerably. So, they eat more food and get more nutrition. The faster metabolism helps them grow faster. It is even more rapidly during the first year of the goldfish birth.

Ideally, the tank temperature for the goldfish needs to be anywhere between 75°F-78°F (mid 20-degree Celsius).

You can use a thermometer to get the temperature reading from the tank periodically.  During the cold days, use an aquarium heater to heat the tank for a toasty warmness.

The better the genetics, the better the change of goldfish growing big will be. Sounds pretty cool, am I right?

Find a reputed goldfish supplier and tell them that you want goldfish genetics that would grow big. We hope that they would provide you with the right choice. Also, avoid fancy goldfishes since these won’t increase as big as the regular ones.

Finally, try to get the goldfish at a younger age. So, you can start the husbandry at an early age of the goldfish.

So, here the summary of what we got from our discussion on “how big can goldfish get”, theoretically and practically.

In theory, a goldfish may grow as long as ten to twelve inches in the tank.

The practical experience says a tank pet goldfish won’t grow bigger than a few inches only. However, you can help the fish grow really bigger by keeping it in larger (I mean immensely larger) tank, feeding it with high nutrition and finally, taking proper care of it, especially when it proliferates during its first year of birth.

Once everything maintained adequately, and you got the right genetics, you may end up getting your lifetime goldfish well over 10” to 12” long. But you must be lucky for it.

Follow Me
Latest posts by Anne Thynne (see all)