Algae, particularly green algae, are necessary for maintaining the aquatic ecosystem. It promotes oxygen circulation in the pond.

However, algae can kill other aquatic life if left to grow excessively. It decreases oxygen levels and alters water PH in the pond.

Incorporating algae-eating fish is an environmentally friendly method of controlling algae growth. You should also take additional measures to prevent excessive algae growth, e.g., avoid putting excessive food in the pond for the fish, as the uneaten foods provide nutrients for algae growth.

The Chinese algae eater’s scientific name is Gyrinocheilus aymonieri. The freshwater fish is also known as the sucking loach or honey sucker.

It is most commonly kept for food and also for cleaning the aquarium. It is native to southeast Asia but also thrives in rivers and ponds worldwide as long as the water parameters are favorable.

Generally, the Chinese algae eater is a solitary fish. It likes to attach itself to rocks in flowing water. But it can also dwell on flat surfaces. It is not showy and active but instead prefers to hide.

It has a laid-back appearance that is easily mistaken for the Siamese algae eater due to its muted color and pattern.

Although the exact appearance varies from species to species, most are pale brown or golden with dark black stripes that run horizontally across the length of the fish. The belly area is lighter.

The Chinese algae eater has a long slender body with small fins. Their most unique feature is their small dorsal fins with multiple firm rays for a spiky look.

Another notable feature is their large mouth and lips, which create a vacuum for easy attachment on smooth surfaces.

The Gyrinocheilus aymonieri are somewhat aggressive, which makes it difficult to keep with other types of fish. They attack other fish that are the same size as them.

Since they are bottom dwellers, set up your pond with large rocks and sand at the bottom to provide a conducive environment.

Although they mostly feed on algae, consider substituting their diet with bloodworms and brine shrimps. If you notice that they have lost interest in algae, reinvigorate it with wafers.

Koi fish are a variety of Cyprinus rubrofuscus. Their scientific name is Cyprinus carpio. They are also commonly referred to as Nishikigoi.

They are colorful fish kept in ponds for decorative purposes. They vary in color ranging from metallic shades such as gold and water silver, orange, yellow, blue, white, black, etc. They may also vary in a scale pattern.

Koi fish are omnivorous. Although they eat algae, it is not their favorite food. Therefore, if you want to keep them primarily as algae eaters, limit other food options.

If your tank has high algae growth, incorporate other algae eaters. They tend to eat regularly, which puts them at risk of overfeeding.

They are generally peaceful and hardy. They make great pond mates with other types of fish. However, it is important to introduce them gradually to allow them to acclimate to the pond water conditions and their pond mates.

They must be quarantined for at least 21 days before being introduced to the pond. Their average size is 12-15 inches, but they can also reach 35 inches. They require a minimum pond size of at least 1000 gallons. They have an average life expectancy of 25 – 35 years.

The Chinese Hi Fin Banded Shark is scientifically known as Myxocyprinus asiaticus. Other names, including topsail sucker, Asian sucker, Chinese sucker, wimple carp, high-fin loach, Chinese high-fin sucker, and many more, also refer to it. It is a freshwater fish native to China.

Therefore, you require a large pond to keep a Chinese sucker in a larger pond, 500-1000 gallons. They reach sexual maturity at 5-6 years and have an average life expectancy of up to 25 years.

They have a distinctive appearance consisting of black and white bands throughout the body. The contrasting color is complemented by a triangular dorsal fin, which is quite thin.

They are bottom dwellers, so they have flat bellies. Notably, they have a single row of pharyngeal teeth.

They have Shaolin behavior and thrive in the company of other Chinese high-fin suckers. They also make great community mates with most varieties of goldfish and loaches.

They are omnivorous. Aside from algae, they feed on bloodworms, earthworms, brine shrimps, crustaceans, mollusks, and vegetables such as seaweed and zucchini.

Its scientific name is Misgurnus anguillicaudatus. It is also commonly referred to as dojo, dojo loach, Amur weather fish, or weather loach. They can be kept as ornamental pond fish or for food.

It is an exotic, freshwater, eel-like fish native to Eastern Asia. They are colorful and beautify a pond. Their color can range from brown, greenish, grey, albino, to orange. The mouth of the fish has barbels that they use to sift through pebbles to find food or to dig under gravel and hide.

Pond loaches grow up to 12 inches. The females are bigger and fuller than the male.

They are bottom scavengers and omnivorous. They feed on algae, small aquatic animals, brine shrimps, bloodworms, and high-quality fish flakes.

They are peaceful, hardy, and strong fish. They are somewhat friendly to humans and enjoy hand feeding and contact. They are great pond mates with goldfish. Their average lifespan is 10 years.

The Otocinclus catfish are another great option for pond cleaning fish. They are a small variety of catfish that grow to about 2 inches long. They are also referred to as dwarf suckers.

They have mellow personalities and pair well with a wide range of tank mates. They are also easy to keep as they are low maintenance.

Their main source of food is algae. They particularly like brown algae and can eat it up pretty fast. Therefore, they can significantly improve the water quality in a pond, especially if it has high algae growth. They also occasionally enjoy wafers and green leafy greens.

Their main distinguishing physical features are that they are covered with beige and brown spots throughout the body. They also have a thick black stripe running across the center of the body.

Tilapia are tropical freshwater fish native to Africa. They can be kept in ponds in most parts of the world as long as the water is warm—55F and above. They are most popular as consumable fish because they have a mild taste and are available in most grocery stores.

They are also a great option for pond-cleaning fish as they consume large amounts of algae. Their favorite type of algae is blue-green algae and filamentous algae. They also eat twigs, rooted plants, and small animals.

Although there is a wide range of algae-eating and pond cleaning fish, specific species may not be suitable for your specific pond conditions. Therefore, to determine the most suitable species for your pond, consider the following factors:

Although using chemicals is an effective way to control algae, it is not environmentally friendly and may cause an imbalance in the water parameters. Introducing compatible algae-eating fish into your pond is a more sustainable option and better for pond maintenance.

As discussed above, some of the best algae-eating fish include Otocinclus catfish, tilapia, koi fish, pond loach, Chinese algae eaters, and Chinese hi fin banded Shark, which can help keep your pond clean. 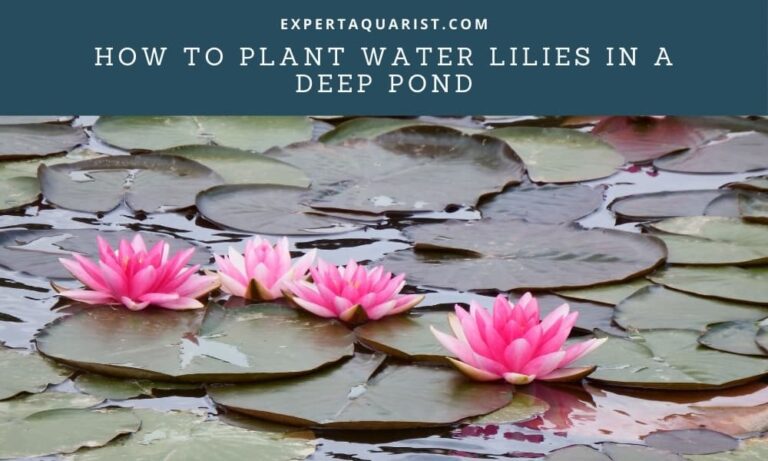 Water lilies are one of the prettiest and most colorful aquatic plants. It may seem complicated, but planting water lilies are relatively straightforward. All you need is the ingredients and just the right instruction to follow. Therefore, you need to select a perfect aquatic basket, fill it with clay-based soil, put fertilizer to boost the… 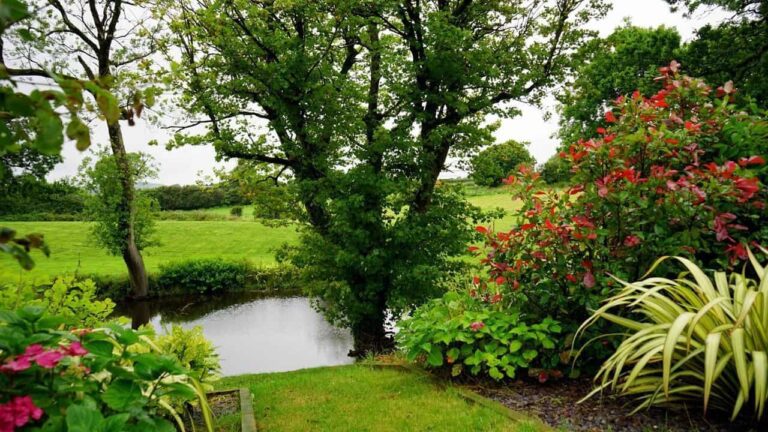 A backyard pond certainly looks beautiful. If you have always only thought of having one but do not know how to build a pond in your backyard to perfection then this guide will prove to be immensely helpful. Just make sure you follow each of the steps carefully and your backyard will then have the… 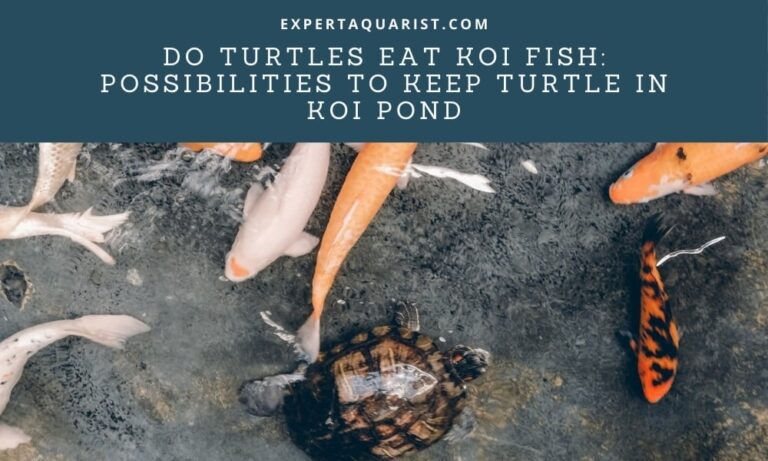 Imagine you are in your backyard and listening to your favorite music as the cascades of the waterfall are creating a beautiful ambient around the pond. You also see your favorite turtle swimming around the pond, and you suddenly decide to introduce the turtle pond with koi fish. (Or imagine vice versa. You have a… 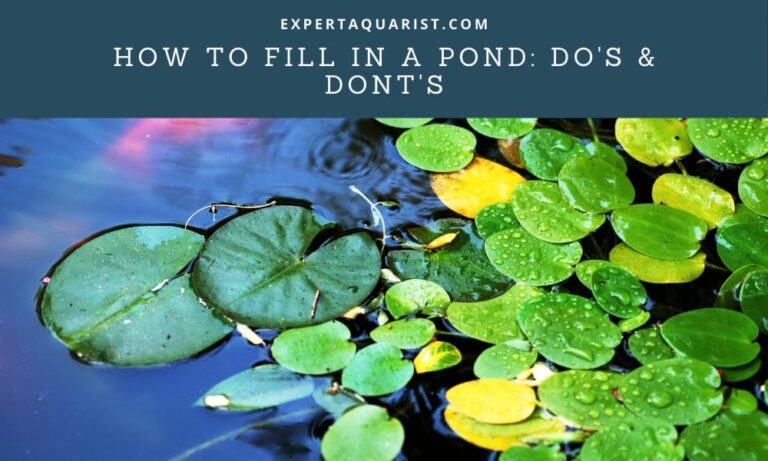 Pond is something that makes you realize how beautiful and relaxing life can be. It can be an amazing part of your surroundings, and you can find peace in the color of the plants, swimming of the fish, or simply by listening to the sound of the water. But how is it done? After digging… 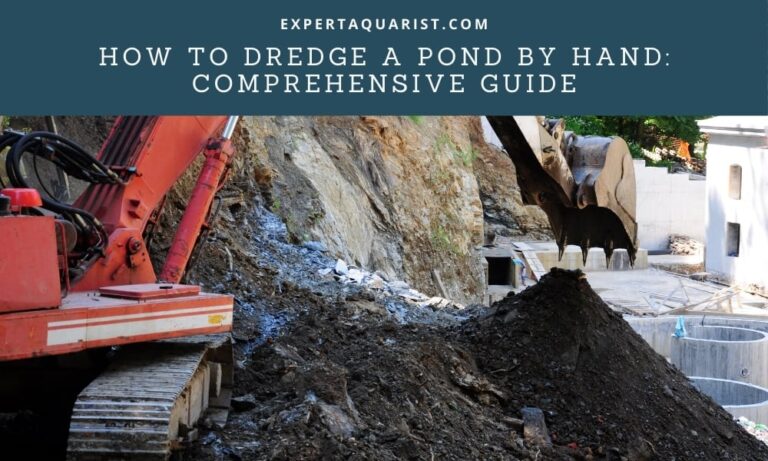 For the sake of your fish and the surrounding environment, you must always keep your pond clean. An invisible enemy of your pond is debris. People neglect it and let it accumulate until one day it becomes a headache for you. At that time, it’ll block sunlight, promote weed and algal growth, and suffocate your… 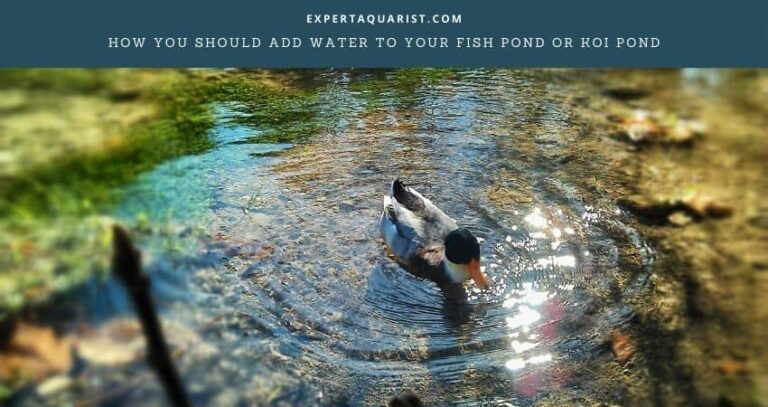 A pond is a great way to offer your fish the space they need. However, if you don’t add enough water to the fish pond then there won’t be enough oxygen for them to survive. Without enough of it, they’ll feel restless and irritated. Knowing how you should add water into your fish pond is…